In 2009 I built the Raygun Rover art car out of a bunch of scrap and a motorcycle engine. Special thanks to Greg & Megan Jones, Rachel Riggins and Orion Fredericks. 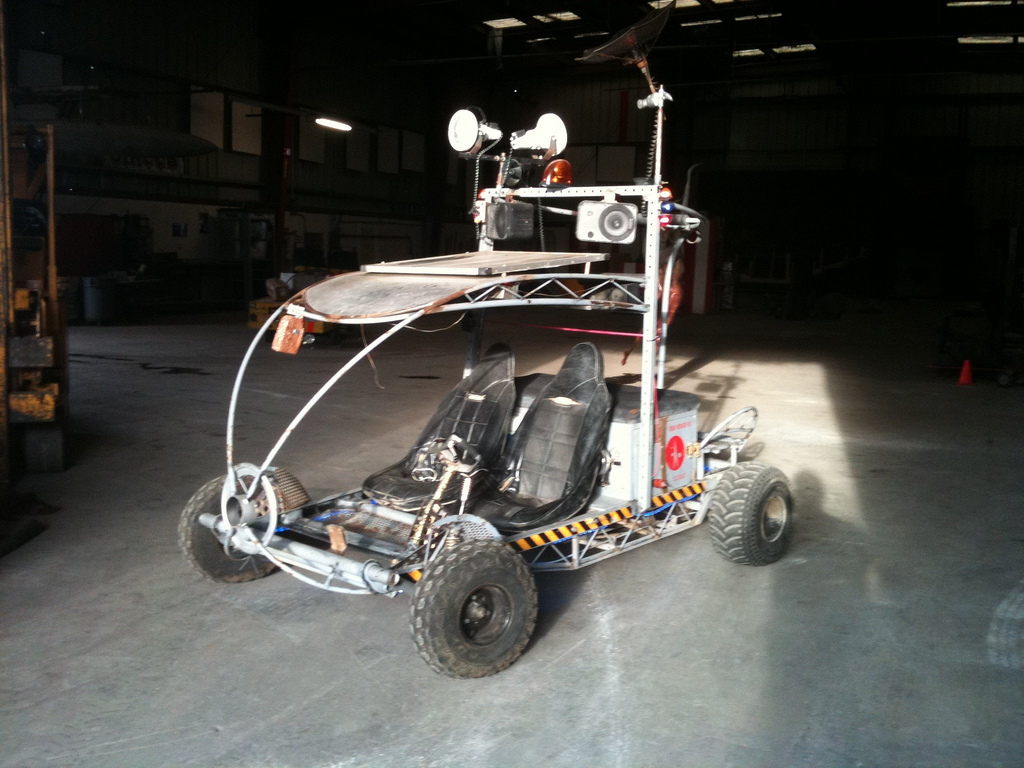 Determined not to re-invent the wheel, instead
I re-invented the whole car! This is the project where I did everything I would have normally advised against. I suppose sometimes we have to break our own rules.

The Raygun Rover began its journey into space as a 1981 Honda Odyssey: 250cc, 2-stroke, single-seat ATV, wich I immediately chopped into four pieces to make it longer and wider, mostly to accommodate more passengers, but also because, well, refer to the previous paragraph.

Let’s just say that I was somehow fascinated with the idea of building something complex, yet simple, and was trying to satisfy some specific design criteria, namely; lightweight, quiet, low to the ground, and with an open feeling to reference the original NASA Moon Rover from the 1970’s.

With a 125cc motorcycle engine for the drive-train, as well as a space-capsule’s worth of vintage audio and airline equipment, the interior conveyed the feeling of a top-secret prototype, with enough knobs and switches to satisfy any experimental test-pilot. The built- in audio system broadcast authentic NASA ground- control recordings, and an onboard P.A. added the ability to communicate live, up-to-the-minute updates to whatever species were outside the craft. Of course at any moment we could switch to a recording of Jefferson Airplane, Jimi Hendrix, or David Bowie, depending upon which star system we wished to trip-out to.

The vehicle also had an integrated 120V generator, 12Vbattery, solar panel, power outlets, tool storage plus flood-lights, making it a functioning mobile support vehicle for working in the remote desert.

So what rules did I break, you ask? Firstly, I’d advise anyone making an Art-Car to start with a street-legal, registered and insured vehicle that passes your local pollution emissions standards. Don’t build something you need a trailer for, or that you have to pay to store off-street, or that is going to put you in jail or leave you with a fine. Make sure the thing works; does it steer? does it have brakes? seats? doors? a roof? headlights? turn signals? keys? If not, you’ll spend most of your time just building and modifying the vehicle, and less time actually making Art. I mean that’s why you’re building this thing right?

Or maybe you just wanted to get your hands dirty, see how far you can push the envelope, over- come multiple challenges, make machines do what they were not intended to do, and generally prove them all wrong when they say;