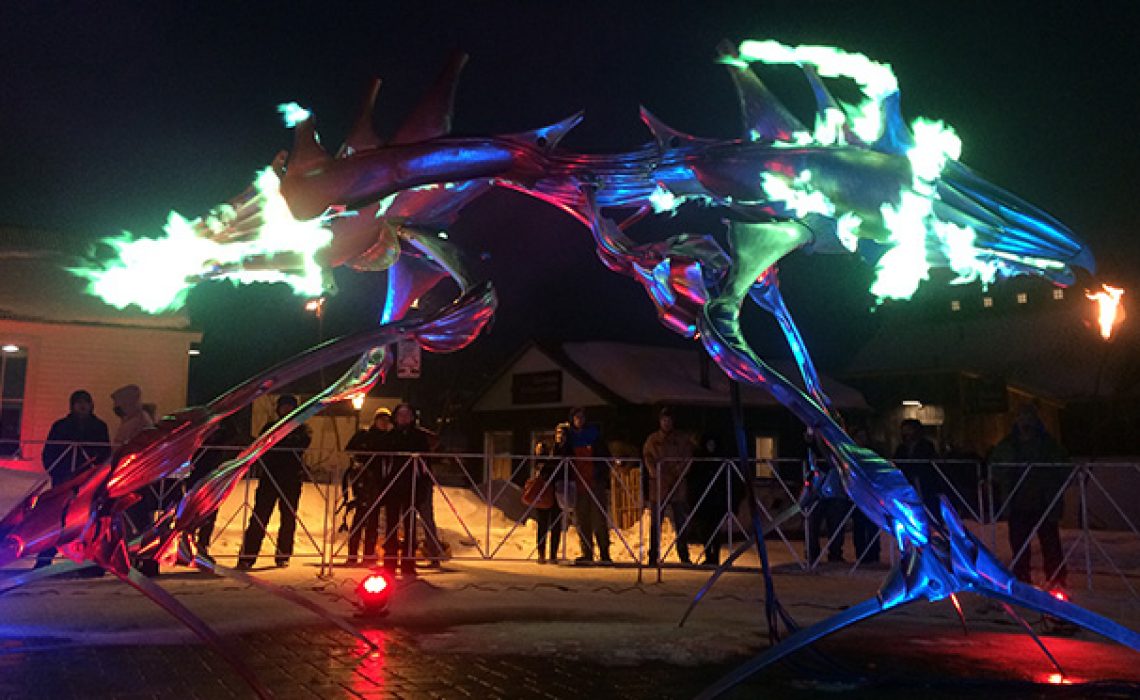 Gilly & Fire in the Snow

This week I’m in Breckenridge, CO for the International Snow Sculpure Championships and Fire Arts Festival, assisting my good friend and collaborator Orion Fredericks with his latest creation Gillaptourous Corvus, aka “Gilly,” a 14ft tall fire breathing sculpture made from cold-forged and tig-welded stainless steel. This is Gilly’s first public appearance and the location is unlike any I have ever worked in before.

Fire art? In the Snow? At first it seemed absurd, but on second thought, of course! What a perfect juxtaposition of opposites, and who doesn’t want warmth when it’s cold outside? But then…. the more I thought about it… the more anxious I became. Working in sub-freezing temperatures… wondering how the lack of oxygen at high altitude would effect combustion… and then there’s the frozen propane tanks.


One of the greatest challenges of operating big fire art is keeping your tanks warm. As the pressurized liquid propane in the tank changes phase back into a gas it gets colder. The same thing happens to aerosol cans, NO2 canisters and booster rockets on Space Shuttles. Remember the chunk of ice that ended up destroying the Space Shuttle? The external fuel tanks get so cold they freeze the water right out of the air. Except in our case there’s no fear of disintegrating spaceships, quite the opposite. What happens is the lines and valves connected to the tank get so cold they clog up, and gradually you are getting a lot less fuel till there’s almost no flow at all. End result: a very less dramatic fire show. Cold weather makes this problem worse. The colder it is outside the less relative pressure you get out of the tanks. You may have experienced this on a camping trip when the little green propane canister gets frosted over. So you just pop in another one. But we’re running the sculpture on tanks that weigh 100lbs each, and there generally isn’t a backup set of tanks, mostly for budget reasons, but also the 2 tanks should be enough for two nights of show.

The solution is to heat the tanks, but to do that safely and effectively you basically need a hot tub, with an electric heater. BTW never heat your tanks with an open flame unless you are striving for a Darwin Award. We purchased some expensive electric tank heater blankets (unfortunately we could only afford the ones that are made for smaller tanks), kept our tanks indoors all day, and wrapped them in some packing blankets for the show to help insulate them.  By the end of the three hours we did experience significant pressure drop, but we were able to keep the sculpture burning and please the crowd. And to say please is an understatement; these folks had never seen anything like this sculpture before and were enthralled and entranced by the colors and sounds we performed.

It turns out that working in the cold and snow is not as bad as I expected, and we were blessed with a sunny day when we installed the sculpture so I didn’t have to worry about freezing my fingers to the steel.

Breckenridge Creative Arts has given Orion a month long residency in one of their newly renovated art studios, the Robert Whyte House. Robert Whyte was an early pioneer in Breckenridge and built a number of buildings on this lot which have now been beautifully and creatively renovated and turned into numerous workshop spaces including a ceramics studio, printshop, hotwork room, offices, two live-in studios and more. Jen and Kate who run the program are incredibly friendly and helpful.

When I first arrived here for my two week stay, I had one of those scary questioning  moments in life, “What was i thinking?” “What the hell am I gonna do here for two whole weeks?” I mean, I know there’s great skiing here… but that gets expensive! I just took a leave of absence from my full-time job at Obscura Digital, and I’m not exactly rich, nor do I have a ton of work lined up for when I go back to the Bay Area. I’m already blowing through money a lot faster than I thought, especially after traveling to the Sundance Film Festival with the Racing Extinction film the week before. But that feeling quickly faded once I realized that this is the perfect opportunity to do a complete re-vamp on my website and blog, which I am combining into one WordPress-based site for ease of future updating. I can also take this time to go through the past 3+ years of amazing projects and get those into my online portfolio. Maybe I’ll even pick up a pencil and do some drawing.